What is T4? How is the T4 Test Used to Diagnose Hyperthyroidism in my Cat?

What is being tested?
This test measures the amount of thyroxine, more commonly referred to as T4 or total T4, in your cat’s blood. T4 is one of two major iodine-containing hormones produced by the thyroid gland (the other is called triiodothyronine, or T3). The thyroid is a small, bi-lobed gland located just below the Adam's apple. This gland plays a vital role in controlling the rate at which the body uses energy or controls metabolism. Important components of the T4 and T3 molecules include the amino acid tyrosine and iodine (see Figure 1). 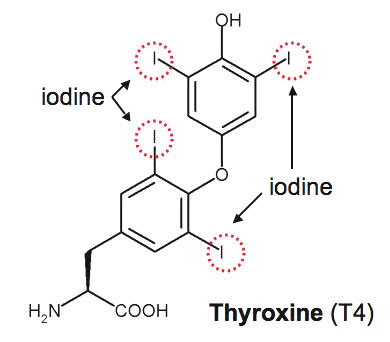 Figure 1
T4 makes up nearly 90% of the circulating thyroid hormones, while T3 makes up less than 10%. Inside the thyroid gland, T4 is bound to a protein called thyroglobulin. When the body requires thyroid hormone, the thyroid gland releases stored T4 into circulation. In the blood, T4 is either free (not bound) or protein-bound (primarily bound to serum protein). The concentration of free T4 is less than 0.1% of that of total T4. T4 is converted into T3 in the liver or other tissues. T3, like T4, is also highly protein-bound, but it is the free forms of T3 and T4 that are biologically active.
Although T3 is an important thyroid hormone, it is of little use in the diagnosis of feline hyperthyroidism; therefore, veterinarians rarely order this test.
If the thyroid gland produces too much T4, the rate of the cat’s body functions will increase and cause symptoms associated with hyperthyroidism such as weight loss, increased appetite, increased heart rate, anxiety, and vomiting. The most common cause of hyperthyroidism in cats is a benign thyroid adenoma but some cats will develop thyroid cancer or carcinoma. The effect of these conditions on thyroid hormone production can be detected by measuring the total T4 (includes both the protein-bound and free portions of T4) or the free T4 (measures just the free or unbound portion of T4).
How is it used?
Total T4 and free T4 are two separate tests that can help the veterinarian evaluate thyroid function. The total T4 test has been used for many years as a diagnostic test for humans, as well as dogs and cats. It is a very useful test and is the main test used to confirm suspected hyperthyroidism in cats.
What does the test result mean?
In general, a high total or free T4 result indicates an overactive thyroid gland (hyperthyroidism). The test results alone are not diagnostic but must be interpreted together with your cat’s clinical signs, symptoms, and physical examination findings.
Since free T4 is the active form of thyroxine, it could be thought to be a more accurate reflection of thyroid hormone function than total T4. Indeed, the free T4 test is a more sensitive diagnostic test than is the T4 test, i.e., the free T4 test will be diagnostic in 98.5% of hyperthyroid cats whereas the total T4 test will be diagnostic in 91% of cats with the disease (See Figures 2 and 3). However, many cats suffering from other illnesses NOT associated with hyperthyroidism will have false-positive results with the free T4 test (Figure 3). For that reason, the total T4 test remains the diagnostic test of choice for cats with suspected hyperthyroidism because we almost never see false-positive results with the total T4 test. 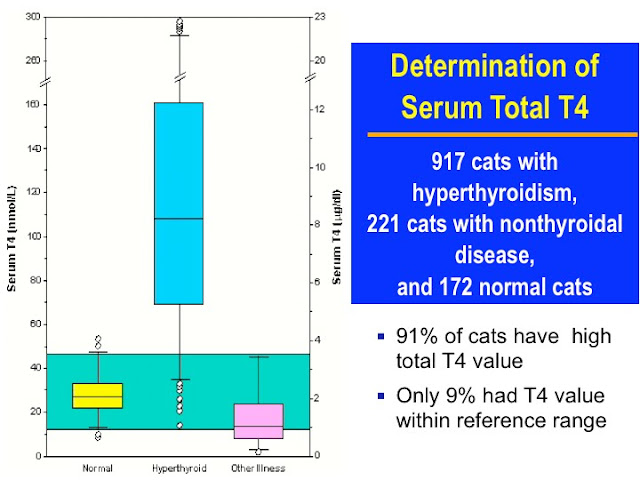 Figure 2
Serum T4 results in 917 cats with hyperthyroidism, 221 cats with nonthyroidal disease (sick cats without hyperthyroidism), and 172 normal cats. Data are plotted as box plots, where the T‑bars represent the main body of data and the box represents the middle half of the data. The horizontal bar in the box represents the median. Outlying data points are represented by open circles. The shaded area indicates the reference range. Notice that none of the cats with nonthyroid illness have a high T4 value. From: Peterson ME, Melián C, Nichols CE: Measurement of serum concentrations of free thyroxine, total thyroxine, and total triiodothyronine in cats with hyperthyroidism and cats with nonthyroidal disease. Journal of the American Veterinary Medical Association. 218: 529-536, 2001. 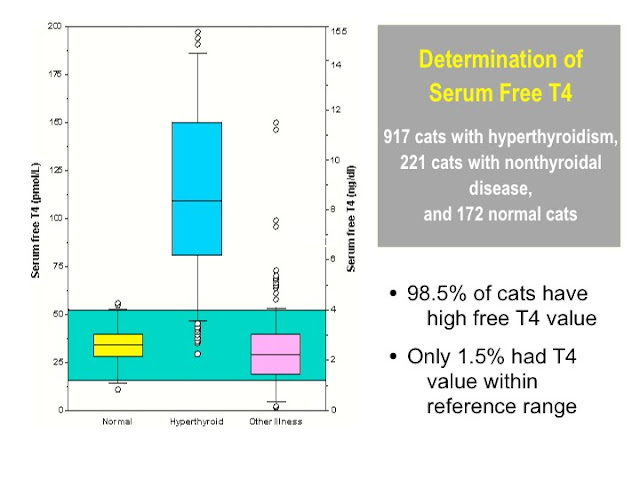