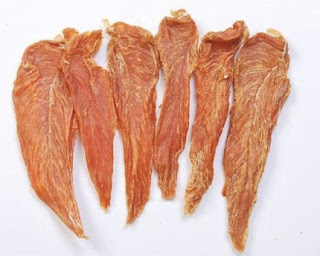 Chicken jerky treats imported from China appear to be responsible for hundreds of recent reports of mysterious illnesses that can mimic diabetes mellitus in dogs. This syndrome has results in the death of some deaths of the affected dogs, which has prompted a renewed warning for pet owners by the Food and Drug Administration (FDA).

In 2006, China was responsible for the melamine contamination of the food additives known as wheat gluten and rice protein concentrate. This triggered a nationwide recall of several dog food items from a variety of manufactures. This time the item of concern is chicken jerky treats.

FDA issued a cautionary warning regarding chicken jerky products to consumers in September 2007 and a Preliminary Animal Health Notification in December of 2008. After seeing the number of complaints received drop off during the latter part of 2009 and most of 2010, complaints to the FDA started increasing again in 2011. In November, the FDA announced an official cautionary warning for consumers feeding chicken jerky treats to their dogs (1).

Now amid reports of more than 500 dogs sickened by chicken jerky pet treats imported from China, FDA officials have begun collecting and testing chicken jerky treats upon import, analyzing samples for evidence of dangerous toxins. To date there hasn't been a specific cause or contaminant identified, but the FDA is looking into melamine and diethylene glycol, chemicals used in plastics and resins.

Dog Treats can Cause Fanconi Syndrome and Kidney Failure

Dogs that consume the imported chicken jerky food products routinely can develop a Fanconi-like syndrome (2). This is an uncommon condition which affects the kidneys and causes them to leak glucose (sugar) and other electrolytes into the urine.

Clinical signs or symptoms of Fanconi syndrome in dogs can include decreased appetite, decreased activity, vomiting, and increased water consumption and/or increased urination. Blood tests may indicate kidney failure (increased serum urea nitrogen and creatinine concentrations).  Urine tests may indicate Fanconi syndrome (high amounts of glucose in the urine). The increased glucose excretion in the urine (glycosuria) can be confused with diabetes mellitus, but dogs with Fanconi syndrome maintain a normal blood glucose level. If left untreated, severe renal failure can develop, and death is possible.

Until more is known, the FDA has made the following recommendations (1):
Bottom line

At this time, I would encourage you to only purchase products that are made in the United States. The first thing that I do when looking at a bag of pet treats is turn it over and look for the country of origin. At least for now, I would not buy any treats that are imported from China.

I also encourage pet owners to limit treats to less than 15 percent of the overall calorie intake for their dogs. Please keep in mind that raw or cooked vegetables such as carrots, green beans, and broccoli make wonderful treats, especially for those dogs who are struggling to lose weight.