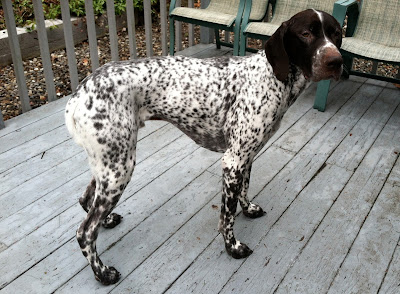 I am hoping you may be able to offer me some insight/information about testing for hypoadrenocorticism (Addison's disease) in dogs.

I have a 3-year old male neutered German Shorthaired Pointer. Since April, Luke has been steadily losing weight despite no changes in his diet. He has also seemed "off" (slightly lethargic, just not himself) and had slight changes in gait from time to time. He then would seem better and back to his normal self.

In November, he began having chronic diarrhea and losing weight at a much more rapid pace. He has now last 20 pounds, going down from 85 to 65 lbs. He has had an ultrasound, exocrine pancreatic insufficiency test, full tick panel, fecal tests, serum thyroid tests, and complete blood count and serum chemistry panel. No clinically significant abnormalities have been detected in any these tests.

He had no response to treatment with Panacur, Proviable, or Flagyl. He responded to high-dose prednisone, but then when we tapered the dose, his clinical signs returned. He was off prednisone for 3 days before doing the first ACTH stimulation test, which came back out of range:
We waited 3 weeks to do the second ACTH stimulation test which came in within the normal range. These results were as follows:
Based on this information, is it possible he has Addison's disease? Or is the fact that his stimulated cortisol value came back within the normal range on the second test just an indication that the prednisone was affecting the results in the first ACTH stimulation test?

I have been doing a lot of research on this because he seems to have many symptoms that match up with Addison's disease. Some things I've read have said that it is possible in atypical Addison's disease to have varying test results. Other things have disagreed. This is why I am trying to contact someone who specializes in this field. In your experience, is this something you have encountered?

I really appreciate any insight you may be able to give me. Thank you for your time.

The most common cause of secondary hypoadrenocorticism is iatrogenic (induced inadvertently by the veterinarian) resulting from overly rapid discontinuation of long-term and/or high-dose glucocorticoid therapy. Very rare spontaneous or natural causes in the dog include pituitary or hypothalamic lesions (e.g., large destructive pituitary tumors) or idiopathic isolated ACTH deficiency.

In addition to primary Addison's disease or hypoadrenocorticism  (the failure of the adrenal glands to produce both glucocorticoid and mineralocorticoid hormones), and secondary (which is the failure of the pituitary gland to secrete ACTH, a hormone which stimulates the adrenal glands), a third type of hypoadrenocorticism has been described — "atypical" Addison's disease (7-9). This is a confusing term, which I believe can and should not be avoided because it really does not describe a definitive diagnosis.

Almost all of these dogs diagnosed with atypical Addison's can be classified into primary or secondary forms of the disease with proper diagnostic testing (10-11). In addition to ACTH stimulation testing, this may include  determination of circulating ACTH concentrations (the pituitary hormone). In some dogs, repeating the ACTH stimulation test and measuring the basal and ACTH-stimulated concentrations of aldosterone, a mineralocorticoid hormone is helpful.  Properly classifying the dogs into primary and secondary subtypes helps us better predict the needs for long-term treatment.

In  this dog, there is no reason to go any further because the last ACTH stimulation test completely rules out all forms of Addison's disease — primary, secondary, and atypical hypoadrenocorticism (see below).

ACTH Stimulation Testing
In normal dogs, administration of a dose of ACTH generally produces a rise in serum cortisol to values greater than 6 μg/dl. In contrast, dogs with hypoadrenocorticism (typical or atypical Addison's disease) have an absent or blunted response to ACTH administration. Basal and post-ACTH serum cortisol concentrations are less than 1 μg/dl in over 75% of dogs and less than 2 μg/dl in virtually all dogs with primary hypoadrenocorticism (1-6).

Although the post-ACTH serum cortisol concentration may be as high as 2 to 3 μg/dl in a few dogs with naturally occurring secondary hypoadrenocorticism (due to pituitary ACTH deficiency), the great majority of these dogs also have ACTH-stimulated cortisol concentrations of less than 2 μg/dl.

When borderline results occur (post ACTH cortisol concentrations between 2 and 6 μg/dl), the first thing that one must consider is the recent use of glucocorticoids, which would act through the negative-feedback effect to suppress circulating ACTH and cause temporary and mild atrophy of the adrenal cortical cells that secrete cortisol. That is likely what happened in your dog.

So in your dog, the first ACTH stimulation test is borderline for Addison's, but the cortisol response is high enough to make it unlikely. Remember that the dose given for Addison's disease would only be between 2.5-5 mg per day (around 0.1 mg/kg/day), so anything higher than that dose would suppress pituitary ACTH secretion and could lead to blunting of the cortisol response.

In accord with that, his second ACTH stimulation test done 3 weeks later is completely normal, totally excluding Addison's disease.

It's time to look for another disease. Consider an abdominal ultrasound or endoscopy next to better define your dog's gastrointestinal disease.

Would using the Genta Spray (with Betamethasone valerate) on a skin irritation on my dog a few times before the ACTH test affect the results in any way?

Yes, in a normal dog, it could feedback to the pituitary gland and decrease ACTH secretion. This could lead to adrenal atrophy and the false-positive diagnosis of Addison's.

Thank you Dr. Peterson. The baseline cortisol was 4.6 and one hour post was 15.6. So I think it is definitive that there is no Addison's disease. Am I correct?

Yes, no Addison's with those results!

Dr Peterson, My Maltese Mimi just had her ACTH Stim test. She had Pre # of 2.5 Her Post was 25.1 ug/dl Does this conclude Hyperadrenocorticism and most likely Pituitary tumor ?

Cushing's is not diagnosed on blood tests alone. The test results are consistent with mild hyperadrenocorticism. You can't differentiate pituitary tumor, pituitary hyperplasia or adrenal tumor with an ACTH stimulation test.

Talk to your vet.